Welcome to the Zankyou no Terror Wiki

The wiki format allows anyone to create or edit any article, so even you can help. Feel free to discover, share and add your knowledge!

About Zankyou no Terror 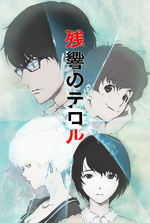 Zankyou no Terror (残響のテロル, Zankyō no Teroru, lit. Terror of the Echo), also known as Terror in Resonance and Terror in Tokyo in Japan, is a Japanese anime television series produced by MAPPA. The anime was directed by renowned director Shinichirō Wanatabe, with character designs by Kazuto Nakazawa and music by Yoko Kanno.

In an alternate iteration of the present, Tokyo has been hit by a terrorist attack that has devastated the city. The only evidence of the culprits is a cryptic video uploaded to the internet, which sparks paranoia across Japan. The culprits leave behind a riddle for the police to crack if they intend to stop the bombs planted by them across the city.

Unbeknownst to the authorities is that the terrorist masterminds—who call themselves "Sphinx" (スピンクス, Supinkusu)—are two teenage boys, Nine and Twelve. Although they apparently should not even exist, they have nonetheless decided to "wake up the world" with their heinous plans of destruction, with their fingers on the trigger.

We need your help in making the Zankyou no Terror Wiki better! You can help the wiki by: We appreciate your help!
Community content is available under CC-BY-SA unless otherwise noted.
Advertisement